Pickpocket and Scam Activity at the Eiffel Tower, Paris

Many tourists visit the surrounding area of the Eiffel Tower at night to see it lit up with strobe lights and enjoy the tower’s nighttime ambiance. The benefit of visiting the tower late in the evening is that there are smaller crowds and shorter lines which make the ascent more pleasant. What attracts tourists is that the entire Eiffel tower is cloaked in the warm glow of 336 light projectors and 20,000 sparkling strobe lights – see the below video. From the tower’s observation decks, you can enjoy cool evening breezes as you view floodlit bridges, churches, and other landmarks in the glittering Parisian lightscape. Visiting the Eiffel Tower at night is a beautiful way to appreciate Paris which is known as the city of lights.

Planning Your Nighttime Visit at the Eiffel Tower

The Eiffel Tower is open until 11:45 p.m or 12:45 a.m., depending on the time of year. Entrance fees vary, depending on whether you’re climbing the steps or taking the elevator. However, make sure to check with their website, as this time and availability changes due to special events, holidays, as well as recent issues with political and terrorism concerns.

Pickpocket activity on the way to the Eiffel Tower

For years, pickpockets, both professional and opportunists, have known that a great spot to target the pockets and handbags of tourists is the subway metro lines 1 and 4, but more importantly, the main stretch of pavement from the Champ-de-Mars-Bir Hakeim metro and RER station to the Eiffel Tower.  This area is where most of the tourists will get on and off the metro to walk to the tower. These specific locations were brought to the public’s attention when an undercover police story broke about the arrest of numerous young girls who were all pickpockets working in these locations.  In December, Paris police arrested 19 people believed to be the ringleaders in a major pickpocketing operation on the Paris public transport network.  These thieves targeted the metros and stops favored by tourists – as well as the walkway to the Eiffel Tower.

Authorities say the gang is responsible for about two-thirds of thefts on the metro and has netted at least €1.3m. The Paris police judiciaire has been working with Spanish and Italian authorities for the past three years to track down the leaders, who recruited 100 young girls from eastern Europe.  Investigators believe the girls were threatened with violence if they failed to reach their daily targets, typically between €300 and €1,000 ($300-$1,060).  This is a sad story, but one that all travelers need to be aware of.  Many people make a living as pickpockets – both young and old, and in order for them to do so, someone – especially unknowing tourists will end up falling victim to these individuals.  Let’s hope that reading these pages on how to identify pickpockets will give you enough insight so your trip to Paris will only be great memories of famous locations, great food, and interesting sights – not the lobby of a Paris police station making a report for having your wallet stolen.

Pickpocket Activity at the Eiffel Tower

Many tourists who visit the Eiffel Tower at nightfall victim to pickpockets. The strobes come on for about 10 minutes every hour to illuminate the Tower and that attracts the tourists, and the tourists attract the thieves. The pickpockets use a variety of distractions to target tourists such as asking for directions, asking the time, where the subway is in the area, as well as other common pickpocket distractions.

Visitors should also be aware that the Eiffel Tower operating company knows about the pickpocket problem too – and even documents that they are not responsible for theft due to pickpocket activity when visiting the tower.  “The company may not be held liable for theft (from pickpockets), loss or damage of any kind, during a visit”  is a quote from their website. While this is normal for any business which is open to the public, having a quote that specifically makes reference to “pickpockets” is not. This in itself should alert you to take additional precautions.

Pickpockets operate at a variety of locations at the Eiffel Tower.  One of the most obvious indicators will be one of the numerous “beware of pickpocket” signs you will see at the base of the tower, right before you enter the Eiffel Tower elevators, within some of the elevators, as well as around the various observation decks.

Another area pickpockets find their marks is the line for the women’s rooms at the base of the Eiffel Tower.  Sometimes the line is very long, and once you get farther down into the bathroom area, the size of the corridors becomes narrow.  Many tourists have reported thefts at this location, as well as while using the restroom at this location.  This photo shows the pickpocket warning on the way down to the toilets.

If you elect not to wait for the Eiffel Tower elevator to take you back down due to the long, crowded lines, many tourists elect to walk down the stairs. Generally, walking down the Eiffel Tower’s stairs is not a great idea. While it may seem like a good idea initially, many pickpockets like to work the stairwell knowing that it is an easy location to target unsuspecting tourists. The stairwell is packed with tourists, going both ways. It is not very wide, so you are forced to bump into people during your journey. Many tourists have reported that they fell victim to pickpockets walking down the Eiffel Tower when they were targeted by pickpockets using the following pickpocket scam.

As you make your descent down the Eiffel Tower stairwell, about a 1/4 of the way down, the pedestrian crowd starts to back-up. You are forced to walk slower and begin to enter a packed crowd walking close together. A small group of people in front of you begin to walk very slow. It can be men or women, but many times it seems that the group is young women. The women stop short, causing you to bump into them.  One of the girls begins to yell at you, while other women pickpockets are behind you and naturally bump into you. Everyone is trying to pass you, but you are held up by this unruly group of girls.

As many people try to pass you, items are removed from your pockets, purse of daypack.  The same type of thieves do the same going up the Eiffel Tower.  Think about this for a second, other than someone who wants one heck of a good workout, who walks up the Eiffel Tower, except someone up to no good.

Always be on the lookout for the Gold Ring Scam at the Eiffel Tower, or anywhere in Europe for that matter – but it does seem to hit the most in Paris.

Honesty and Lost Rings in Paris

The scam works like this.  You are walking in Paris when a man, woman, or child crosses your path and suddenly stops and bends over, picking up a shiny object on the sidewalk.  Many tourists think that the person is picking up a bottle cap or some other junk.  That’s when the scam begins. Here is a sample conversation that has been repeated to thousands of tourists every year: 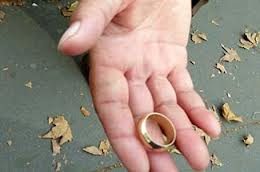 “Excusez-moi, Monsieur. Vous avez laissé votre bague ici.” He showed me a large gold wedding band.
“What? No, it is not my ring, Monsieur.”
“Mais oui, c’est à vous.”
“Mais non. I have no ring.”
“Mais oui, it is your ring. Well, if it is not then give it to your woman. It will make her happy. It is a woman’s ring.”
He hands me the ring. Indeed it is heavy. Apparently gold. “Um, no. It is not mine.”
“I cannot wear it. I am a man,” he said. “Give it to your woman.” He turned and walked away.
“Well, OK. Merci, Monsieur.” I turned and walked away.
He turns again. “Ah, Monsieur. S’il vous plait. I am hungry. I don’t have enough money for a baguette.”
“Um. OK. Take some change.” Hmm. He is honest but only needs money for a baguette. I gave him a few coins from the change still in my hand.
“No, that is not enough. Just a little more. I gave you the ring.”
“Well, OK, here is two euros but nothing more.” And I walk away.

You just fell victim to the “gold ring scam.”

Video of the Gold Ring Scam in Paris

The below video was shot by a family visiting Paris.  Wait for a few seconds and you will see a young man stop in front of the boy, bend over, and pick up the “gold ring” and try the scam. This family was smart and moved on.  But at least you have an idea of how innocent this scam looks when it happens.

Dancing doll scam.  You will find this scam on the streets of Paris.  It looks like these dolls magically dance, but don’t be fooled and keep a hand on your wallet or bag.

“I am from Bosnia – Do you speak English scam”
This is a classic setup scam used around the world.  Gangs of women roam around beneath the tower. They usually wear bright clothing, long skirts, maybe even a flower in their hair. Their approach is usually to ask if you speak English. If you acknowledge them, they hand you a white card. On it is written how they have escaped from Bosnia (or another country) with their brother, they are homeless and need help, and can you spare any change? So what do you do? Appear hard-hearted and tell them you don’t have anything? Or give them something? Meanwhile, while you are distracted by reading their card, any unprotected belongings are rifled by an accomplice. Given there are large numbers of these women, all carrying white cards, there must be a lot of homeless Bosnian siblings in Paris. Best to wave them away as soon as they approach you and they quickly go off seeking another victim. We were approached at least twice on each visit to the tower.

You may come across an old woman, painfully bent over and using a child’s crutch with a begging bowl out. Watch for long enough, and you will see her make a miraculous recovery, put the crutch under her arm, and stroll casually away with her “earnings”. Best to ignore her and keep walking.

“Praying to my cup” scam
This one was actually more common on the Champs Elysee but if frequently found at the tower base. A woman with a headscarf will be kneeling in silent prayer before a cup on the ground. Watch long enough, and you will see her get up, walk with her cup to a nearby accomplice, casually tip her “earnings” into his bag, then go to another spot to take up her position of prayer once again. Best to ignore her and keep walking. 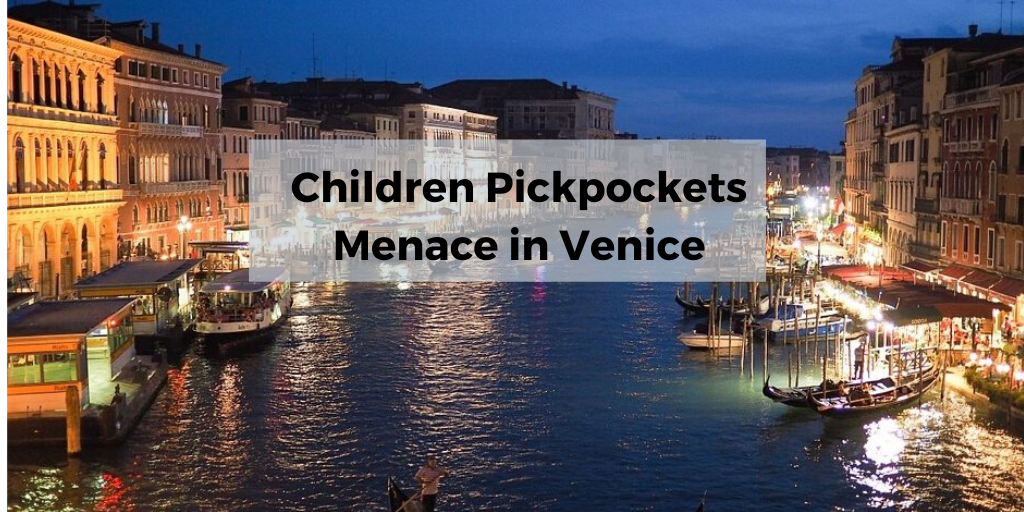 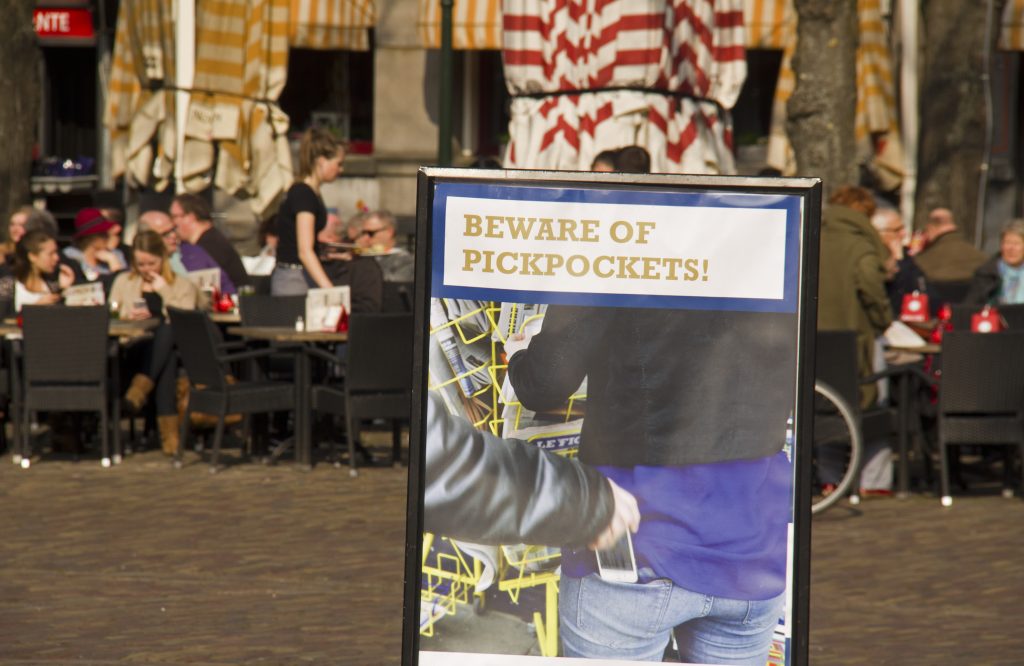 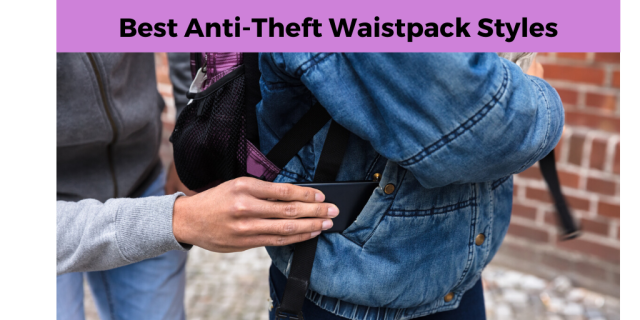