Paris is the city of light, fashion, artistic expression, and love. Paris was also rated in a TripAdvisor.com survey as one of the top ten cities in the world for pickpockets. Tourists visiting Paris are targeted by a variety of thieves, which can be can be any gender, race, or age, however, you have the highest chance of being targeted by young teens (especially young girls) under the age of 16 because they are difficult to prosecute.  While several thousand tourists make police reports that they had fallen victim to Paris pickpockets, it is believed that nearly half of these thefts occur on Paris trains and the Metro.

Keep in mind that pickpocket activity at the below locations may have changed, so keep that in mind.

Taking a little time to learn about how to avoid Paris pickpockets can potentially save you hours of travel disruption and hanging out at a Paris police station making a pickpocket report – not something most travelers want to do.

Just know that Paris pocket pickers love to target tourists while they are passing thru or riding the train or Metro, and is believed that nearly half of Paris’s pickpocket reports are reported occurring on these two systems. Know that all Metro lines present high levels of pickpocket activity, especially during the summer months.  In regards to timing when pickpockets operate, keep in mind that it can happen at any time, however, many of the thefts occur on the Metro between 4 and 6 pm when it is rush hour.

Paris pickpockets can be any gender, race, or age but are commonly children under the age of 16 because they are difficult to prosecute. Keep out an extra eye for groups of young female teens, as they are probably one of the most prevalent groups that can be easily identified.

The following Metro and RER Lines are ones that travelers need to be very vigilant when riding on, or in the area of, as they have higher than average numbers of victims falling victim to pickpockets:

REF Rail Link – In Paris, two trains, in particular, are favorites with pickpockets because they’re both loaded with tourists: The RER train between Charles de Gaulle Airport and central Paris, and the RER train that goes between Paris and Versailles. For years, both the US State Department, as well as the Paris police have reported that the rail link RER B from Charles de Gaulle airport to the city center (downtown Paris), both east and west directions, are often prime hunting ground for pickpockets – as many of the stops are tourist favorites.

Metro Line 4 – Chatelet to Barbes-rochechuart, and especially the part that goes to Montmartre from Chatelet.

The following train and metro stations are reported to be locations with considerable pickpocket activity:

Solution: First be observant of the people who are near you at all times, especially at train stations. Second, there are clever travel products on the market that can help you keep items like your wallet or money safe. If you insist on carrying a wallet, use a security-style travel that cannot leave your person. 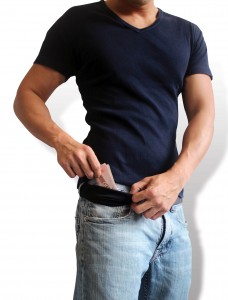 Solution: Always keep your belongings in eye’s sight and be wary of passengers carrying jackets or long scarves, especially in the warm summer months – it is unusual to wear heavy clothing in warm weather. Use a purse designed for travel with built-in anti-theft features. Most importantly look for locking zippers and slash resistant reinforced construction to foil thieves and keep valuables safe.

Solution: If you find yourself in such a situation, try stepping on the foot of the woman or man who holds onto you. This reaction will catch them off guard and bring attention to the group.

Solution: Try to pay with exact change, but when not possible, do not walk away from the bus driver, ticket counter, restaurant, cashier, etc. before counting your change. Research initial costs such as airport transportation before arriving in France.

Solution: It is impossible to always avoid these types of spontaneous events, but you can carry your valuables more safely in a money belt hidden under your trousers. With the short window of opportunity for this scam, a money belt will help to spoil the attempt because it is difficult to reach.

Solution: If someone touches you, or presses into you, immediately try to move. Additionally, you can purchase a small bag or waist pack with slash-proof straps or belt with a hidden closure.

Solution: If you need help with pay phones, ask a staff member of the train station or a storekeeper. If a friendly stranger offers to help you, decline.

The biggest scam with taxis in Paris may be how difficult it is to catch a cab. While there are not as many reports of overcharging or scams on Parisian taxis, compared to Rome for example, it is still to be a vigilant passenger.

Know that Paris Metro and Train pickpockets use simple, t effective strategies that steal items from tourists.  Many times pickpockets will have a light jacket or sweater draped over a forearm – which is used to hide the fact that they are reaching under the jacket with the other arm for a victim’s wallet.  Paris Metro pickpockets will use this type of technique on a crowded metro or train car, but their favorite opportunity seems to be during the bustle and bumping that occur as a car empties and refills. The idea is to grab a wallet from someone on or boarding the train just before the doors close and then get off while the victim rides away.